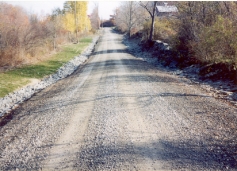 Twenty-eight thousand miles of unpaved roads provide local service to Pennsylvania’s rural residents and the major enterprises of agriculture, tourism, mining/mineral industries, and forest products. Although they are inexpensive to maintain, loss of fine materials from the roads and their drainage areas creates dust and sediment. If not properly maintained, these roads can become sources of runoff and pollution to neighboring streams and waterways. Runoff in our waterways depletes the oxygen levels, smothering aquatic life that supports our fisheries. Dirt roads that are not properly maintained become large providers of dust and sediment.

On April 17, 1997 the PA General Assembly approved House Bill 67 as amended, the Transportation Revenue Bill. This bill was signed into law as Act 3 of 1997. Included in this law is $5 million annually earmarked for Dirt and Gravel Roads Maintenance. $4 million goes directly to the State Conservation Commission while the remaining $1 million goes to the Department of Conservation and Natural Resources for maintenance on state forestry roads.

The State Conservation Commission apportions Dirt & Gravel Road Maintenance funds to the County Conservation Districts. A Quality Assurance Board (QAB) has been created in Lackawanna County by the County Conservation District to establish and administer the grant program. The QAB is responsible to encourage local cooperation with environmental quality goals, to provide adequate opportunity for public input, and to ensure participation amongst a wide spectrum of environmental expertise at all levels of government.

The four-member QAB is comprised of:

Local municipalities and state agencies that maintain dirt and gravel roads are eligible to receive funding. However, to be eligible for the program, the participant must first attend a two-day training session for “Environmentally Sensitive Maintenance of Dirt and Gravel Roads”. To request funding, applicants submit a one-page application to the local Quality Assurance Board (QAB). The QAB, in turn, reviews the applications. To ensure equal access to the funds, the QAB establishes local priorities to prevent pollution. To be eligible, projects must employ “environmentally sound” maintenance practices and products to correct pollution problems related to the roadway. 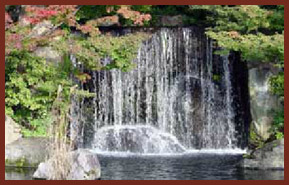